Anchor began in 1973 when Peter Wallis was called by the Lord to leave his employment and begin a cassette tape ministry. Listen to a prophetic recoding of Peter in 1973 below:

Peter Wallis, trained in Agriculture at Wye College, Ashford, had been an agriculture representative for many years with ICI. In 1973 he felt the Lord ask him to leave his work and begin a new company called Anchor Recordings. At the time the use of the cassette was enabling a greatly increased, easy and cheap means of distribution of music and the spoken word. Anchor’s vision was to widely distribute recorded Christian talks by leading speakers from all denominations worldwide but mainly from the Evangelical and Charismatic traditions.

The business began in Peter and his wife Meg’s home in Ashford. In 1974, Peter was joined by Jim Harris and his wife Linden. Agencies were established with recognised Christian organisations and Churches and recording talks at conferences in the UK and abroad. Important examples of this would be with Lydia Fellowship and Prayer for Israel. Anchor was also responsible for introducing “Scripture in Song” into the UK and Continent. This was produced by Dave and Dale Garratt in New Zealand and proved to be very popular and influential, putting God’s Word into an attractive and easy to remember music form.

As the work expanded there became the need for particular premises. In 1976, Peter was introduced to two ladies, Betty Coles and Gladys Woodford, who had established the Richmond Christian Bookshop. They caught the Lord’s vision for Anchor and generously offered to buy new premises. So, a year later, the business was established at 72 The Street, Kennington, Ashford which has proved to be well suited.

In 1978, on the retirement of Peter, Jim and Linden were asked to take responsibility for the work together with excellent staff. At this time Anchor was part of the registered charity run by Betty and Gladys but now named Vision and Venture Ltd., but the decision was taken by the Trustees to separate Anchor from the Trust and so Anchor became a private company. It wasn’t until 1990 that Anchor re-entered the same charity but now renamed Anchor Recordings Ltd, a process made more easy by its recent joining with Christian Recordings Associates Ltd.

The work had by now expanded significantly especially after establishing a close relationship with Rev. David Pawson and his worldwide teaching ministry. Anchor had taken the method of distribution through cassette, video, CD, DVD and into MP3’s and of course books, but there was now the need to move with the market into free and wide distribution on the web plus translations into other languages. In 2009 David had met Steve Dally who was knowledgeable and talented in this area and very committed to David’s ministry, so it was very timely that Steve took Anchor’s work forward following Jim and Linden’s retirement in 2010.

The vision given by the Lord to Peter Wallis in 1973 is still active today for which we give great thanks to God.

Today we still distribute Bible teaching, devotional and evangelistic messages, worship songs and videos, worldwide.The ministry belongs to God and our principal aim is to listen to His leading and do what He says. The Word of Grace and Truth must be declared for everybody and we would value your prayers to enable us to spread the good news of Redemption in Christ Jesus. 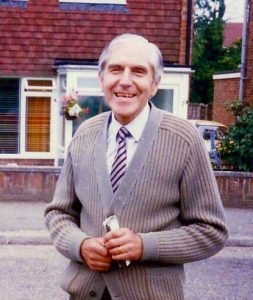